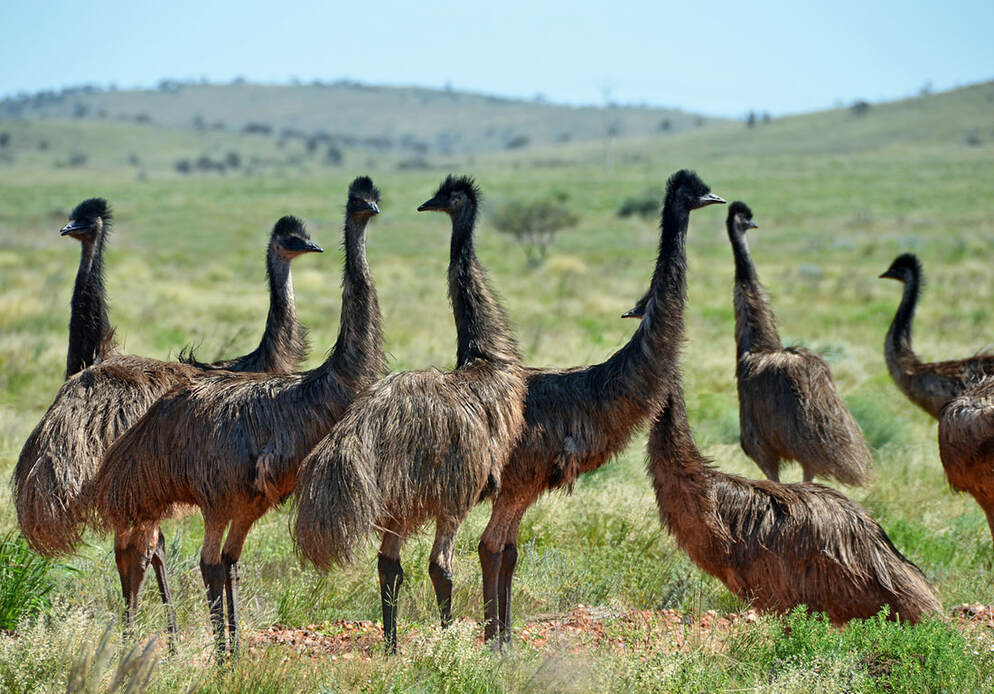 Yindi was a very small Emu. Can you see her in the mob?
There once was a very small emu named Yindi. She knew she was small because all the other emus in her mob were a head and long neck taller. Her brothers and sisters would run like the wind across the grassy plain with their heads thrust forward to show how swift they were. Yindi couldn’t’ see the point in wasting all that effort running so far and so fast. After all, when you got there, you just had to turn around and come back.

She much preferred wandering quietly over the plain and looking at wildflowers. Also one of her favourite tricks was making herself almost invisible. By standing really still on one leg, spreading her wings and reaching as tall as she could with her long neck, she could look like a small tree. If there weren’t any trees on the plain she would squat on the ground and tuck her head under a wing so she looked just like a large grey boulder.

The other emus in her mob were puzzled about Yindi but they still loved her. In fact if they thought about it for more than a few seconds, which was very difficult for an emu to do, they would have to admit that her difference made her quite special.

Yindi on the other hand was a deep thinker for an emu. For instance, when the hunters came, she knew that running like the wind was no protection from their steel boxes that moved faster than an emu could run.

Emu's run like the wind. Photo Australian Geographic One day Yindi noticed that her father Waru looked worried. His remarkable dark eyebrows were frowning as if he was trying to solve a problem.

“What is it Waru?” said Yindi. 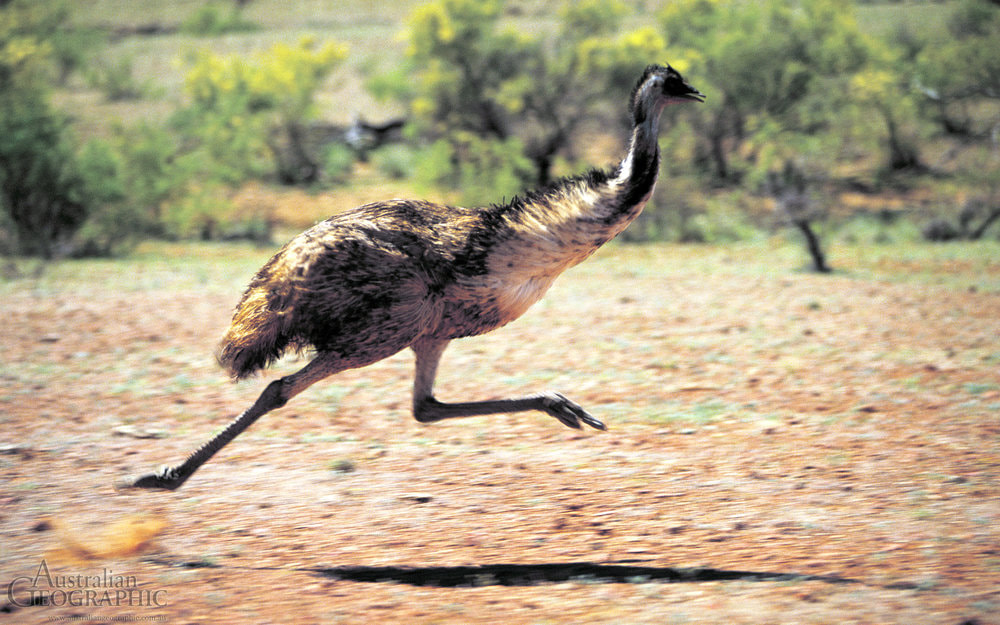 Emu's run like the wind. Photo Australian Geographic
“Those hunters have taken two of our mob and I don’t know what to do. Running like the wind doesn't seem to be enough anymore”.

Yindi thought for a moment and said, “If running like the wind can’t save us from the hunters, perhaps we could do what the other birds do”.
Waru looked confused. “Yindi, the other birds can fly away when the hunters come”. We can't fly!

Yindi smiled “Waru there are bushes we could hide behind. There is a patch of green bushes with white flowers by the creek. When the hunters come, we could all run down to the creek and get behind those bushes ".

Waru did an emu chuckle and said seriously, “Yindi, emus don’t hide, we run like the wind” and he strode away.

Yindi’s mob heard the droning sound of the steel boxes coming over the hill as the sun rose. The emus were away, running swiftly across the plain and setting a fast pace. Waru felt good as the wind whistled past his ears. Yindi couldn’t keep up, so she peeled off toward the creek. Waru saw her go but lifted his pace toward the distant horizon. He could hear cracking sounds behind him but he felt good because he loved running.  When Yindi glanced back she couldn’t understand why Waru was running alone.

When Yindi woke she was shaking with fear. She had to tell Waru and knew there was no time to waste. Just as she finished telling her story the mob heard the droning sound of the hunters, just as she had described.

Waru looked confused. He knew that he instinctively wanted to run like the wind but he was also afraid of the hunters. He said, “Yindi, what should we do?”

Yindi didn’t hesitate, “follow me to the creek where we can hide behind the bushes”

The emu mob laughed at this idea but Waru wasn’t so critical. He knew Yindi was a smart emu and said, “follow Yindi to the creek”.

The mob ran quickly over the plain toward the gully beside the creek. Here they moved cautiously into the bushes. Yindi instructed them to hide by standing very still like a tree or crouching close to the ground like a boulder. 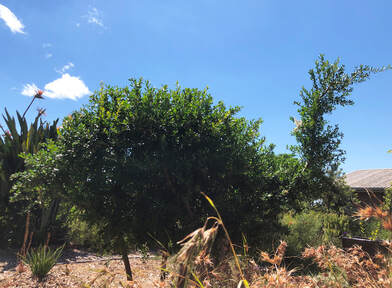 Is it Yindi or is it Sweet Bursaria?
The drone of the steel boxes became louder as the hunters drove toward the emus. They thought they had seen the mob when they drove onto the plain at sunrise. They searched and they searched.

The mob could hear the hunter’s confused voices as they scanned the empty horizon. One of the hunters said “it's not looking good for Christmas dinner this year Jack”, but that was just another meaningless noise to the emus. To their amazement and relief the droning noise slowly faded away into the distance.

Waru felt so proud of Yindi. Even though she was small and couldn't run like the wind, she had saved the mob from the hunters. From then on when Yindi had an idea the whole mob took notice

So if you happen to be walking along a creek this Christmas and you see a flowering Sweet Bursaria that looks a bit like an emu, take another look. It might be Yindi or one of her mob disguising themselves and hiding from the Christmas hunters.
Australia's Emu wars of 1932
Australian Geographic's story of how the Seventh Heavy Battery of the Royal Australian Artillery we no match for the elusive Emus of WA