It was late April 2016 and it had been raining most of the night on the roof of our small caravan which was parked for an overnight stay in South Gippsland. After eight months of one of the driest springs and summers in living memory in Central Victoria where I live and work, the soft patter of raindrops on the van roof combined with the louder hollow thuds of larger droplets falling from the Southern Blue Gums overhead was the best sound I had heard in a long time.

I remember waking early to the soft quietness that follows a soaking rain feeling more optimistic and extra cosy in my bed, only to be rudely reminded that the day was soon to begin by the ridiculously loud hilarity of a family of Kookaburras, somehow amplified by the steep slopes of the surrounding bare hills. Then the magpies were carolling as the sun began to rise, soon joined by the clear ringing calls of the Crimson Rosellas which was as refreshing as the overnight rain.

It saddens me to think that the majority of Australians don't wake up to a chorus of bird song or even hear the sound of rain on a tin roof, two sounds that I would place at the top of my list of the most delightful of experiences. This is largely because they choose to live in the city but it may also be true to say that whether it rains or not and whether native birds exist or not no longer has any relevance to their lives. The natural world is being pushed back from our cities by a care-less approach to development and people in the cities are no longer enchanted by chance meetings with the extraordinary natural world.

Paradoxically my love of nature began on the streets of inner Melbourne in the 1950's riding my bike around Cain's bridge, canoeing along the Yarra River, climbing trees (and falling out of them), collecting frogs spawn and watching them develop into tadpoles and collecting cicadas when they emerged from their holes and watching then pupate in an old shoe box. These childhood experiences have marked me for life and make caring about Australian plants and animals automatic. I find that a walk in the bush at least once a week is essential for my mental health.

Positive life experiences when we are children tend to leave us open to taking up opportunities to relive these experiences when we become adults. These are often happy, joyful and sometimes risk taking times when we connect with something wonderful. My belief and concern is that many of our nations children are no longer being given the opportunity to be enchanted by nature in a way that links them emotionally to wild Australia.

The long term sustainability of society is arguably linked to three critical supporting principles sometimes called ‘the triple bottom line’; Economic security, socially harmony, and a healthy ecology. We spend many tax payers dollars debating and fine tuning our economic and social systems to ensure that they adapt and support our rapidly changing world, but the planet’s ecology has already become expendable to our decision makers because it has no relevance to their lives and they are poorly informed of how critical it is for the long term viability of human existence.

I can recall with hope and optimism the excitement of primary school children that I have shared time with in our local bush, looking at scats, identifying native animal tracks and feeling Koala and Brush-tail Possum scratch marks on the smooth pale bark of River Red Gums. At the age of 6, 7 and 8 they are open to be enchanted by our extraordinary animals and the environment that they live in. I have been delighted to hear from these children, now young adults that those simple experiences left a lasting positive impression and an interest in protecting the natural world. It is these young people who will become involved in organisations like Landcare in the future and play a part in restoring the natural environment to something that is sustainable. My concern is that they are too few and that their voices won’t be heard by the many other Australians who haven’t connected and who don’t understand.

Fast forward to the year 2050 when Australia’s population is predicted to be 42 million, nearly twice what it is today. The pressures on our natural environment will be exponentially greater because of the outward expansion of our cities and the ever growing disconnect of city dwellers.

However a future Australia could be so different if future minds see a healthy ecology as having an equal importance to a healthy economy and a healthy society. How different our cities could be if apartment blocks were ‘vertical forests’ like the two sky scrapers built in Milan containing as many trees as could be planted in a hectare of forest.  How different would our countryside be if linkages between forests and woodlands had been reestablished so that our native flora and fauna can migrate and adapt to a changing climate.

Landcare’s rural focus needs to shift to the cities where there are more hearts and minds with influence, and convincing these hearts and minds has to start in the cradle or soon after if we are to prosper as a healthy nation.
To paraphrase the words of Paul Kelly ‘From little people healthy futures grow’. 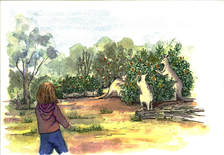 Some special moments can change your life forever.

Read the remarkable story - Amie and the intoxicated kangaroos
(based on an actual incident)
"The kangaroos were reaching up and licking the banksia flowers."