How the River Red Gum
came to be

Dreamtime story of how the River Red Gum came to be

Authors note:
Dreamtime story's make complex ideas accessible to all age groups.
In the Dreamtime many of the animals, important land forms and significant trees were supernatural beings that were half human and through some heroic deed or foolishness they were transformed to the form that we see today. There is always a moral to a Dreamtime story.
This is a story written by Stephen Murphy as part of the story 'Seeds the chronicle' and it is told respectfully to acknowledge the first Australians past and present. It was written in appreciation the deep wisdom, extraordinary knowledge and the environmental care of the 2,000 generations of men, women and children who walked on this land before us.

The story is about the Waddawurrung people who live in the Geelong region of Victoria and who are part of the Kulin nation. This is not an ancient dreamtime story but a modern story written about people from the dreamtime. 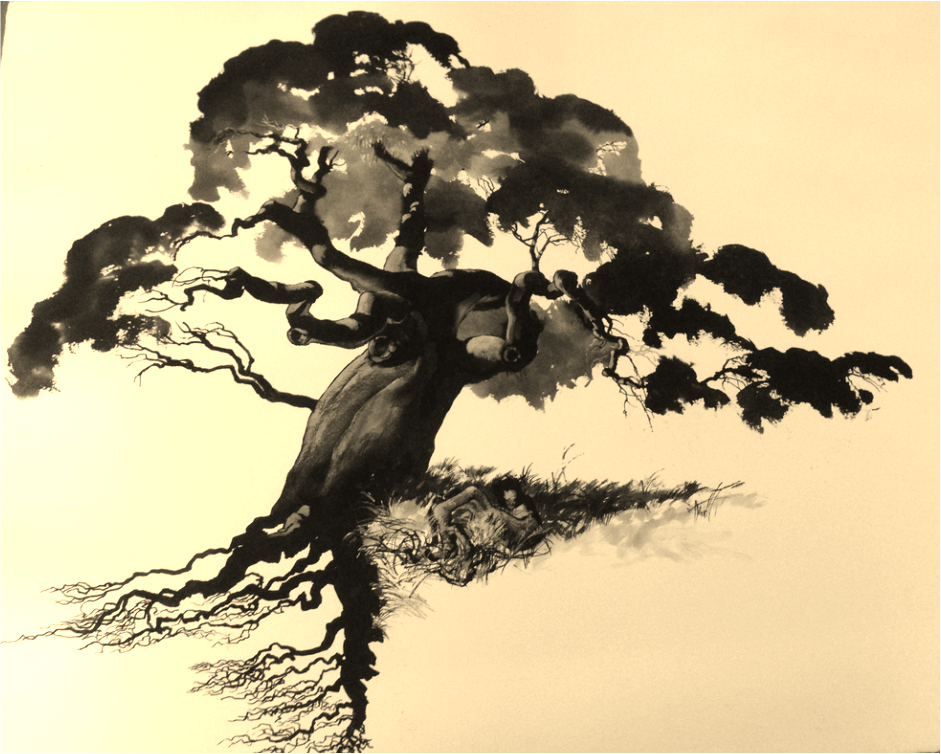 Illustration by Peter O'Gorman
This story is of a time many years ago when there were only grasslands and shrubs on the Basalt Plains west of Geelong.

​At this time living amongst the local people was a clan of giants called the Bool. These men were taller and more powerfully built than all the other clans that occupied the lands and they were greatly feared in battle. Because of their superior strength and stamina, the Bool became so arrogant that they occupied the lands along the rivers and declared that only they could fish and hunt on them. The other clans who lived on these lands complained and pleaded because they too needed access to these fertile and rich hunting grounds, particularly during times of drought, but the Bool appeared not to listen.

The Rainbow Serpent who had made the land, its rivers, creeks and waterholes as well as its mountains and valleys was becoming annoyed with the arrogance of the Bool and sent some stormy weather and heavy rain to swell the river banks and flood the surrounding plains as a warning, but the Bool did not even fear the wrath of the Rainbow Serpent.
​The Rainbow Serpent sent more severe storms and heavy rain that continued for weeks so that the rivers broke their banks and flooded the lands for as far as the eye could see, but the Bool stubbornly stood their ground. The other people were now very afraid that they would all drown and asked the Bool for help. Arrogant and stubborn they may have been, but they were not cruel and didn’t want the other people to suffer while they stood their ground against the Rainbow Serpent, so they invited all who asked them for help to climb on to their backs and legs and wherever they could find a space above the rising flood waters. Even though many people climbed on, incredibly there was always room for more.
​Bunjil the Wedge-tailed Eagle, Waakee the Raven and Balayang the Bat hovered over the Bool and asked if they too could land on them and rest for a while, so the Bool stretched up their mighty arms and spread their long fingers so that the birds, bats and any animal that could climb would have somewhere to wait out the storm. While more and more people and animals climbed onto the Bool to escape the rising flood waters the Bool pushed their feet deeper into the river banks and their toes stretched and clutched at whatever solid ground that there was, so that they could stand firm in the raging flood-waters and they did.
​Meanwhile the Rainbow Serpent was watching and couldn’t help but be impressed with this kindness and heroism as well as the strength and tenacity of the Bool. The Bool cried-out to the Rainbow Serpent and asked for the rains to stop, but they still wanted to inhabit the land along waterways and around billabongs. The Rainbow Serpent agreed only if the Bool would agree to look after the people, the animals and the birds and become custodians of the waterways providing shelter and food for all who needed it. The Bool who had grown to love and respect all those who had climbed onto them agreed to the Rainbow Serpents conditions. So the rain stopped, the clouds cleared, the sun came out for the first time in weeks and the flood waters receded.
To the amazement of all the people when they climbed down off the Bool, these giant men had grown greatly in stature, their muscles had become solid and unyielding, and their hair that had been thick and black was changing colour and turning green. They were transforming into mighty trees before the eyes of the astounded onlookers.

The people looked beyond the mighty trees at the most beautiful and perfect of rainbows arching like a snake across the clear sky. They could see red, orange, yellow, green, blue, indigo and violet mirrored on either side of a shimmering darkness. Many bowed their heads as a sign of respect to the power and magnificence of this divine being that could give life through water and could take life away by sending floods if angered by people’s foolishness.