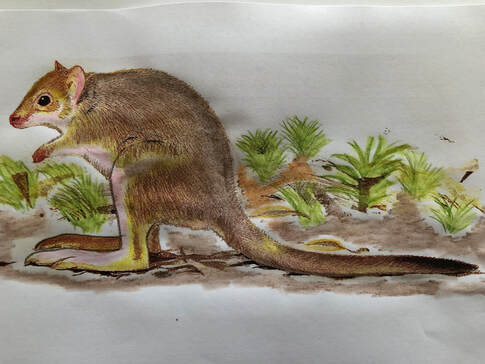 The ‘truffle junkies’ of Australia were once an integral part of our forest and woodland ecologies. They are the small digging kangaroos known as bettongs and potoroos that have a penchant for eating the fruit of fungi.

It surprised me to learn that bettongs and potoroos were the most common kangaroos found in Australia before Europeans arrived? They were so prolific at digging that most woodland trees over 120 years old would have germinated in soils that they turned over.

They are called 'ecosystem engineers’ because of the diversity of environmental services that they provided. These include aerating, fertilising and inoculating the soil, mixing leaf litter with soil (reducing bushfire risk) and then creating the perfect preparations that enhance seed germination.

Over the breadth of our diverse continent we had six species of bettong and four species of potoroo. The Eastern Bettong supported ecosystems in Victoria, New South Wales and Tasmania.
It's average body length is 32 cm with a tail length of 34 cm and an overall weight of around 1.5 kg


Here is a short story about two Eastern Bettongs to help you appreciate and connect with these beautiful small kangaroos.

In 'A fight for survival' our two main characters are Spit, a young male and Yirn (Wathaurong for moon) a young female. (It's a 7-minute read so make a tea/coffee, sit back and enjoy).​ 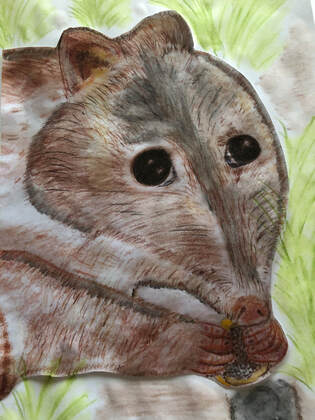 A fight for survival

Spits favourite food was truffles, the fruit of fungi

Spit was sitting on his favourite boulder, warmed by the late afternoon's sunshine. He had remarkable night sight even for a bettong. From his elevated seat, he could watch the other animals waking up.

He could see a quoll's pale nose sniffing the air before it climbed down from its tree hollow. He could see a wallaby cautiously lumbering from its shelter amongst the trees. He could see an antechinus scurrying past with young precariously clinging to its back.

It was a night with long shadows cast by a full-moon, and the wet tree trunks were glistening from the day’s late shower. For Spit this was a very familiar scene. Everything was where he expected it to be and was doing what it should be doing.

Though, Spit felt more alert than usual. An unfamiliar smell was tugging at his cautious marsupial brain as he sniffed the night air. It seemed to be saying “be ready to run”, as running was his only defence. Then from his side, he caught a glimpse of a sinister shadow as it launched toward him.

In an instant, his strong back legs propelled him into the air. His eyes watched the shadow pivot and reach up. His long tail felt a painful nick from the shadow's sharp claws as it instinctively twitched and coiled. The shadow leaped toward him, and they fell to the ground, thrashing in a treacherous embrace
​ 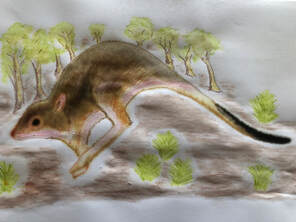 ​Spits strong back legs kicked-out, freeing him from his attacker. In a blink of an eye, he had rolled clear and his powerful hind legs launched him forward. Hopping across the open paddock with his head held low, he zig zagged to confuse the shadow at his heals. He heard its sounds of rage behind him as he extended his leaps forward with his tail trailing low, he made his escape. 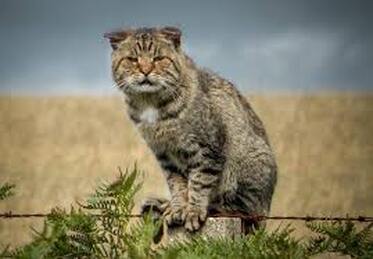 Jill and Kevin were two worried rangers. They had noticed patches of feathers on the ground, so they knew they had a serious problem. Something was killing birds.

“It must have been that fallen branch the storm blew against the fence”. There's no other way it could have got through our wiz-bang defenses.
‘Yeah, I think your right. Those strange paw prints we saw yesterday did look like a cats”.
“We haven’t had a cat in the sanctuary for fifteen years and it could be anywhere!.
They’re smart animals, so it’ll take some catching. It’s sure to kill a lot of wildlife if we don't catch it soon”.
“Yeah, we’d better set some cage-traps and put up the motion sensor cameras today” 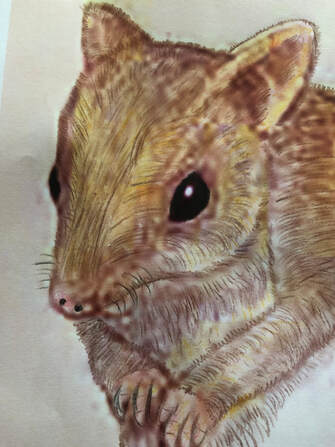 The nights were getting darker and Spit had almost forgotten about his recent scare. He’d moved to another nest amongst the clumps of lomandra and had found another warm rock to sit on. He had different places on his patch of land where he liked to stay. He know that moving from nest to nest kept him safe from night predators like owls.

The rain of a week ago had made the ground soft to dig and there were lots of delicious native truffles, his favourite food.

Sometimes he would move closer to Yirn and they would munch on fungi together. Yirn had lived here as long as he had, on a patch of land close by. He liked being beside her and the smell of her truffley breath as they dug and ate together.

They were both much more alert than usual because of the dangerous shadow. A shadow is all they ever saw, though they had got to know its fetid smell. It was a dead animal smell, and they knew to move well away if they got a scent.

The other small animals and birds were nervous too. Only the night before there was a half-eaten potoroo beside the track and scattered bird feathers were now a common site.

It was too late, the growling shadow was over her
The night was becoming windy and there was movement in the trees overhead. Spit could hear gum leaves slapping and the sheoak’s whispering mournfully. It was quite dark so he felt confident to move into a more open area where he could smell ripe truffles. 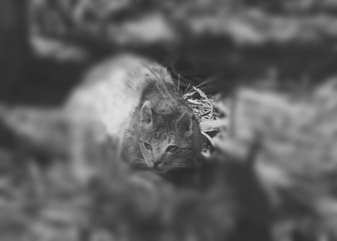 Yirn hadn’t moved away with him because they kept mostly to themselves. When Spit glanced back he noticed a shape in the shadows. Its peculiar restless eyes occasionally reflecting the dim moonlight. He coughed-out a warning to Yirn, but it was too late, the growling shadow was over her.

Spit was terrified. He felt like hopping as fast as he could toward the protection of the tussock grasses, but he didn’t. He turned toward Yirn, hopping at full speed into the frightening spectacle. With his head low, he charged toward the yowling shadow. When he reached Yirn he stopped and propped on his prehensile tail, kicking-out with all the power of his hind legs, striking the shadow on the side. The shadow screamed with rage and fear as it was knocked clear, releasing the shaken Yirn.

Spit and Yirn did what they did best and hopped at full speed, zig zagging across the open field until they found shelter in the tussock grasses beyond. ​ 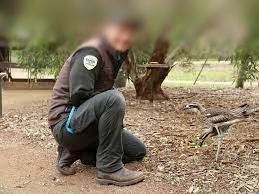 “Jill take a look at this!  I’ve never seen anything like it in all my years as a park ranger”.
“Wow, me neither. We’d better ask the vet for her opinion”.

The two rangers sat down with the vet to get her view on their perplexing discovery.

“I can only put it down to misadventure” commented the vet. “Though there is extensive bruising under its rib-cage which suggest it was hit with a lot of force. Hard enough to impale it against the broken branch of a tree. Its death would have been instantaneous. This discovery must be a relief for you rangers”.

“Yeah said Kevin. This cat has evaded us for weeks. We were about to organise a walk through to try and flush it out, and there it is this morning hanging from a small tree. A grisly sight but for us a huge relief!
Who or what did it I can’t imagine, but we’re so thankful. Five potoroos dead and countless birds last week”.

The vet added “Lucky this happened when it did, because this cat was pregnant. You would have had five times the trouble in a few months”.

"Holy crap! Five cats in this reserve would have set our wildlife recovery program back years, if not decades".
​
New life

Spit always kept an eye on Yirn, particularly now that she had a joey in her pouch. The dangerous shadow was gone, but there were always owls to watch out for. Two sets of eyes were better than one and soon there would be three.

He felt safe on his patch and he instinctively knew how to look after it. As long as there were truffles and bushes with seeds and berries, he’d happily keep digging and spitting.

Spit and Yirn could hear human voices and saw their moonlights coming along the track. They didn’t feel threatened by these humans because they came every night at this time and they always went away. Sometimes they'd leave some tasty seeds.

One voice was always louder than the others.
​ 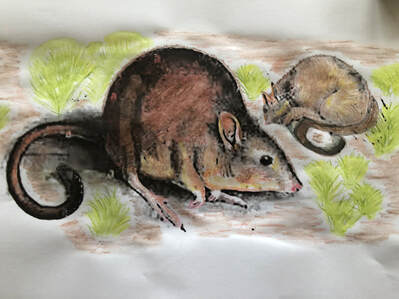 “Over beside the track you can see two Eastern Bettongs. They’re two full size adults with a body length about two thirds of a domestic cat and about half a cat’s body weight. Their long tail is used for carrying nesting materials like grass and small sticks.

Would anyone like to guess what they’re doing to the wattle seeds”?

“Are they mixing them with their saliva”?

“That’s a pretty good answer but it’s only half the story. The fallen wattle seeds are too hard for them to eat, so they discard them.  Though, in the process of chewing fungi and fruit, the wattle seeds become scratched and pitted. This simple process botanists call scarifying, and it changes everything. It starts the wattle seeds growing”.

“The bettongs seem to have learnt this because within a week or a fortnight they’re back digging in the same spot. By this time some of the wattle seeds are soft, plump and are starting to grow roots. As ‘bean shoots’ they’re now edible, more nutritious and I guess to a bettong, much tastier. The great news is that they don't find all the germinating wattle seeds, so some are overlooked and grow into strong, healthy trees and shrubs".

“But there is more magic that these little ecosystem engineers are working. You suggested before that they are mixing the seeds with saliva. Well that is a very important observation".

“A bettong's saliva contains thousands of fungal spores and so does their droppings. This shandy of soil, spores and seeds is literally spat or pooped back onto their diggings before they move on. So they’re digging, planting seeds and inoculating the soil with fungi throughout this woodland every night. Remarkably each bettong moves about 3 tonnes of soil each year, that’s three trailer loads”. 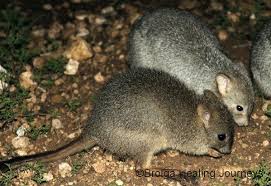 Spit and Yirn watched the group move away. It was a dark, still night with a clear starlit sky. They had picked up some enticing smells of their favourite truffles. And with the soil so soft and moist, truffles were plentiful and easy to dig. Life was good and Spit was relaxed. He was looking forward to enjoying a midnight feast with Yirn and her joey at his side.