Bill had rare trees on his property that I had been wanting to see for about a year. I had met him at an event at the nearby sanctuary a year ago and was intrigued when he told me that he had remnant Silver Banksia growing on his property nearby. Whether it was a bad case of “I'll get around to it" or perhaps a low priority in the context of running a small business or a combination of both, the end result was that I didn't get to see them. Disappointingly it had taken an invitation from Bill to design a boundary plantation that motivated me to be there on this day.
​
Bill had finished explaining the important features that he wanted in his eight row plantation when I enthusiastically added that it will be great to plant some new Banksias in this plantation to support his remnant old trees. "By the way" I said, "if they're close by, can I have a look".
Bill shuffled awkwardly and exclaimed with his eyes fixed on the ground in front "It's only one Banksia and I think it's on its last legs".
We walked the hundred meters or so and stood before a wonderful old tree. A tree that had survived for several hundred years of winter cold and extreme summer heat, a tree that was 12m tall which is tall for a Silver Banksia, a tree that looked so solid and resistant to the passage of time, a tree that did appear to be 'on its last legs’ because it had lost all of its leaves which is not a good sign for an evergreen tree.

I asked Bill if he know of any other Silver Banksia's in the Dog Rocks area and he just shook his head. That uncomfortable empty feeling of arriving somewhere too late to enjoy a long anticipated event washed over me.

Had I turned up just in time to witness the death of the last Silver Banksia?

This realisation was even more discouraging when I recalled that these Banksias that were once common and are now missing from the granite hills around Victoria. They have disappeared along with their usual companions the Drooping Sheoaks and the Lightwoods. George Ulrich a lecturer in Mining at Melbourne University in 1875 writes of the vegetation commonly found on granite outcrops in Victoria:
Granite occupies a considerable portion of the area of the colony, forming larger and smaller isolated tracts and massives…. The higher points and spurs are in most cases quite bare, or support but a poor forest-growth of gum-tree (Eucalyptus), and, as specially characteristic, of she-oak (Casuarina) and honeysuckle (Banksia).
​
The Silver Banksia, originally called Honeysuckle by early settlers, is a remarkable tree for its rustic beauty and its extraordinary yellow candle flowers.  Its natural home is quite widespread, extending from the Eyre Peninsular in South Australia throughout southern and central Victoria and into NSW as far north as Armidale. It's an adaptable hardy tree that will grow in most well drained soils. It's a tree that is larger than life giving character to any landscape because of its enduring solidness. Even young trees look ancient, paddock bonsai's, twisted and gnarled, rarely straight. Aside from this timeless quality, their yellow flowering cones are large and showy and full of sweet honey flavoured nectar much to the delight of the honeyeaters, parrots and possums of our bush. 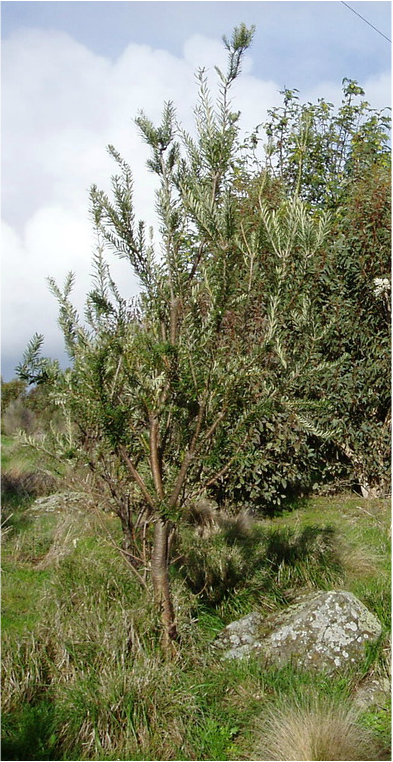 A young Silver Banksia. It could live well over 100 years.
The first Australians soaked the flowers in water to sweeten drinks for children and to make a slightly alcoholic drink for adults. The dry cones of the Silver Banksia were used as strainers and to transport fire as smouldering cones from place to place. Kangaroos and possums are known to get tipsy on old flowers that have begun to ferment, getting a bad case of the staggers after over indulging.
Read the charming illustrated story of 'Amie and the intoxicated kangaroos' here
Unfortunately for the Silver Banksia, our early settlers didn't see it as useful, which lead to its pernicious disappearance from our landscape in all states. As Ecologist Ian Lunt writes in his popular blog, 'The woodlands of honeysuckle and oak disappeared as the trees fed the stoves and the seedlings fed the sheep of the new colonists'.

In a chilling excerpt from the Burrowa News, NSW on Friday 13 August 1880,
'Clearing the timber has done much, both towards improving the pasture and adding to the beauty of the estate. The country is gently undulating, and in its natural state lightly timbered with gum, honeysuckle and lightwood trees. As the honeysuckles fall and cover the ground with dead wood, a system is being carried out all over the estate of cutting down and burning of all these trees, leaving only the lightwoods and gums.’

Standing in front of the old Banksia I followed a very large root emerging from its trunk, half buried and half exposed. It seemed to be reaching out to me and saying ‘I'm not done with this world yet’. I bent down and felt the firmness of the bark. A dying tree will often shed its bark and like a mangy fox, look patchy and unhealthy. There was none of this to be seen even when I examined its trunk. There was some small evidence of sawdust suggesting a borer had taken up residence, but the bark looked like the bark of a healthy tree, showing no signs detaching.

I said farewell to Bill after encouraging him to fence off an area around the old tree. This would give any fallen banksia seed a chance to germinate and  preserve this rare plant as a reminder of its illustrious past. I promised myself that I would return to visit this ancient Australian, hopeful that I would see it sprouting fresh healthy leaves once the winter ended and the warmth of spring began enticing obstinate leaf cells to regenerate.

A change in season will I hope invigorating this respected elder, a rare and endangered reminder for us of a past when nature was honoured and esteemed. This Silver Banksia had survived centuries of our fickle and harsh climate, surly it would 'thumb its nose' at the hottest and driest year on record and 'just get on with it' as it had always done.
Read more about two other plants that are becoming rare on our natural landscapes;