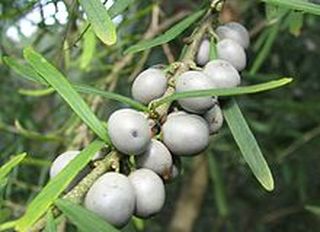 Tree Violet berries are a popular food with birds. The berries are small and produced in large numbers by female plants
​My most vivid memory of Tree Violets is of a drama that unfolded eight years ago in late summer while I was out collecting the small violet/cream coloured berries that grow on the Tree Violet bush. I was in the habit of taking my Jack Russel terrier to keep me company and I could always count on him giving a rabbit a good chase but that day I got more than I bargained for.
​

I was picking berries and was so intent on avoiding the large thorns that grow along the branches that I didn't notice a fox quietly watching me from behind a Tree Violet just five meters away, but of course the terrier picked up its scent in a sniff.
Before I go any further I should mention that Tree Violet comes in three distinct sizes and each form is as tenacious as a terrier;
The biggest of the Tree Violet forms grows to 3 - 4 meters tall and wide (can be confused with Boxthorn, Lycium ferocissimum) and is often found along creeks and river banks under old River Red Gums.
The medium sized form grows to 1 - 2 meters and is often the only plant growing on a fence line where a perching bird has dropped the seed.
​The Third rarely gets to a meter tall and has 'doggedly' survived sheep grazing in open paddocks for over a century because its leaves grow behind its very sharp thorns, giving it the perfect in-built tree guard.
All forms live over 150 years and suit paddock planting as well as a landscaped garden. The two larger forms can be pruned into a hardy bird and insect attracting hedge that looks very like the privet hedge in classically designed gardens.
It was the largest of the Tree Violet forms that I was relieving of its berries and I can remember thinking, how useful this shrub would be as tough wind break with protected nesting sites for small birds, when a flash of white and brown cut across my peripheral vision and a cacophony of screams and howls ruined the perfect rural peace and quiet. The fox was a big animal and  the terrier was only half its size but they were instantly locked together muzzle to muzzle in a fight of such ferocious intensity that I was convinced it couldn't end well for the terrier. 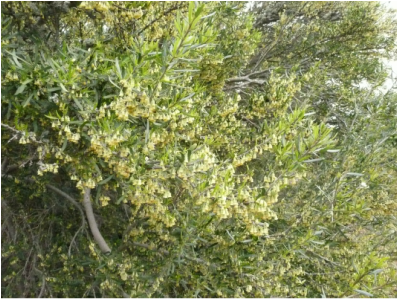 The yellow Tree Violet flowers have a strong violet scent
My next hour wasn't spent seed collecting but trying to separate the two animals. When I succeeded and the fox turned to run the terrier was straight after it and the battle was on again. Eventually the legendary tenacity of the terrier overcame the cunning of the fox and I can vividly remember an exhausted dog, bleeding and panting, sitting beside what appeared to be a dead fox.
The next day I went back to finish collecting berries from the same Tree violets but the fox was gone. The terrier on the other hand had a muzzle swollen to twice its normal size and was happy to rest in the back of the ute.

My other vivid memory of the Tree Violet is the heady violet scent given off by the beautiful pale yellow pendant flowers in Spring. If the plants had been flowering and not fruiting the day before, it's likely I'd have no story to tell, as the sweet scent of the flowers would have easily masked the pungent odour of the nearby fox.