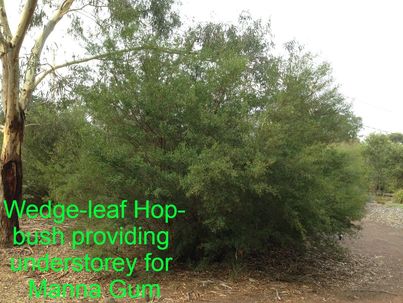 There are few Australian plants that can claim to be cosmopolitan,
a versatile medicinal plant and the main ingredient in a uniquely colonial beer.

The Wedge-leaf Hop-bush can make all these claims though it is still a very humble adaptable small shrub that is proving its usefulness in revegetation in the dry unpredictable seasons that we're experiencing in the Geelong region.
​
In the garden the burgundy to apricot coloured hops bring autumn colours in summer and its shiny fresh green leaves make it popular for hedging. Once established its slow annual growth needs only a minimum of pruning to maintain.
​An example of a Hop-bush hedge can be seen at Sovereign Hill, Ballarat.

​The Wedge-lead Hop-bush is found on the dry open plains of Africa, America and India where it has been recognised for centuries by indigenous people as a reliable treatment for an extraordinarily range of disorders. The leaves are used to treat skin disorders like rashes and ulcers in India and Pakistan, leaf infusions are used to ease respiratory disorders like croup and bronchitis in South Africa and the leaves are made into a poultice for fractures and sprains in Bolivia. The first Australians boiled the leathery leaves to treat ear ache and they chewed the sour, bitter leaves to ease the pain of a tooth ache (the juice wasn't swallowed).

The similarity of its fruit to Hops lead our thirsty early settlers to try substituting it in beer brewing. This experiment lead to the production of a very satisfactory brew with tangy bitter flavour and a generous head due to the saponins or foaming chemicals also present in the Hop bushes winged fruit.

​
It's not only humans that appreciate the Hop bush. The black match-head sized seeds are collected by ants when they fall from the 3 m tall rounded shrub. The ants are interested in a fleshy attachment and cart the seeds a few centimetres underground where they are safe from other insects that eat the seed.

​All it takes is heat from the baking sun and a follow up rain events to start a new generation of Hop bushes growing.
Birds like thornbills, robins, honey eaters and swallows prefer the Hop bushes safe, dense leafy framework for nesting and seed eaters like the lorikeets and rosellas greedily eat the nutritious clusters of winged seeds.
​
The Hop bushes extraordinary ability to cope with dry conditions makes it ideal for planting under older trees. This assists with the establishment of the important shrub layer in open plantations which improves wind shelter at ground level for stock. Once established the Hop bushes seeds are spread naturally, filling in open spaces, continuing to add to plant diversity and improving shelter for domestic and native animals alike.
Other local plants that are as drought tolerant as the hop-bush are the Drooping Sheoak and the White Cypress-pine >